My thoughts on the new Webkinz

last night i couldnt get any sleep and i was up since 2 am bored as hell but it was way too cold to go onto my computer so i resorted to playing some mobile games that i havent touched in ages. one of them being webkinz (classic i guess). booted it up, played for a couple of hours, my phone died, but it was morning by that point. yeah i played that damn game for a few hours, which is surprising since the mobile client has absolutely nothing to do. its terrible. so i hopped on my computer, about to login, i go to the webkinz page and... 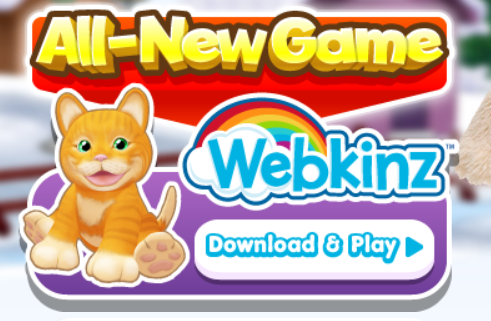 what is this? new webkinz?

anyways, i've been a webkinz kid since before i could talk fluent english. i played webkinz when i was 6. YES, 6 YEARS OLD. before i had any of my own electronics. i remember booting up my parents computer running windows XP, and opening a big blue internet explorer tab to play webkinz. i spent hours on this game. HOURS. i had so many pets. i'd like to say around 30. every time i went to the store and saw a webkinz on the shelf, i'd beg my parents for one. i had most of the cat ones, my first one being the siamese cat which i named Scoopie. no idea how i came up with that name, i was 6. 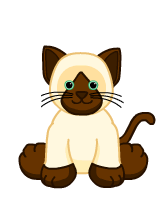 that being said, i was a huge webkinz fan. i grew up on webkinz. until we got rid of our computer... and this was back when webkinz accounts "expired" so after taking a long break from the game, i came back to find that my account was gone. completely gone. all of my pets, my progress, gone. it made me really sad. so i didnt touch that game again.

until about a year or two ago, when i remembered it existed and wondered if it was still up. and it was! but it was barely what i remembered it as. only a handful of players on at a time, so all of the multiplayer events didnt work. walking into buildings, the treehouse, just felt like walking through a ghost town. i wasnt able to relive the charm of webkinz when i got older, because the game had died. i never see webkinz stuffed animals being sold in stores anymore. i remember as a kid, they were everywhere. every kind of store you could think of. if there was a toy or gift isle, there was webkinz. but now, the only place you can get webkinz codes are through third party online sellers, or on the webkinz website. which is just a code and not the stuffed animal. the stuffed animal has always been the selling point OF webkinz. ...i knew this was a dying game and that nothing would revive it.

...so i hoped that this new remake of webkinz would be bigger and better. cooler. without the limit of flash player. without the code that was written almost 2 decades ago. a fresh start for webkinz, built from the ground up. but this could go two ways. one, this was actually a remake of the original to pay tribute to the amazing game that ruled the web in the early 2000's. or two, this is just a way for the company to make a quick buck from another generation of kids, that now have mobile phones. something that us kids didnt have back in 2005.

but enough reminiscing about the past, time to play the new game and see what it's all about. it had just came out 2 months ago so i assume its in open beta right now. 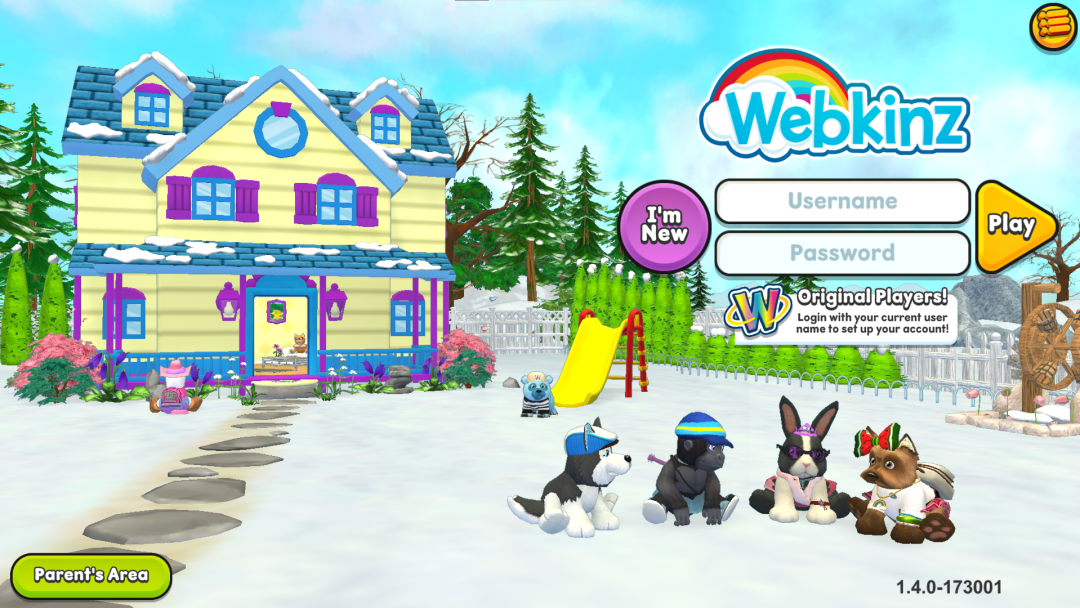 this is the login menu. and honestly, it looks cute! it looks like webkinz. if someone showed this to me without the title and asked me to guess what it is, i'd immedietely know it was webkinz. even if this was a 2020 remake of webkinz, the graphics remind me of some open-world game from 2009 that you'd download on windows vista. it gives it a certain charm. they couldve went for hyper detail, sparkles and rainbows, like most modern kids games ponder too, but they didnt. they stuck with the webkinz aesthetic. i'm really surprised they stuck with the same exact menu though. the menu from the original webkinz looked like big clunky buttons you'd find on a windows xp menu. which is understandable because it did release during that time. but the buttons were one of webkinz most charming characteristics. im glad they kept it. though, i noticed the character models kind of lost their charm... but this is just the title screen, i havent actually logged in. something i appreciate is that i can login with my webkinz account. obviously everything wont be there, but it saves the trouble of having two webkinz accounts. ... enough chatter, lets login and see what it looks like.... aaaaannddd- 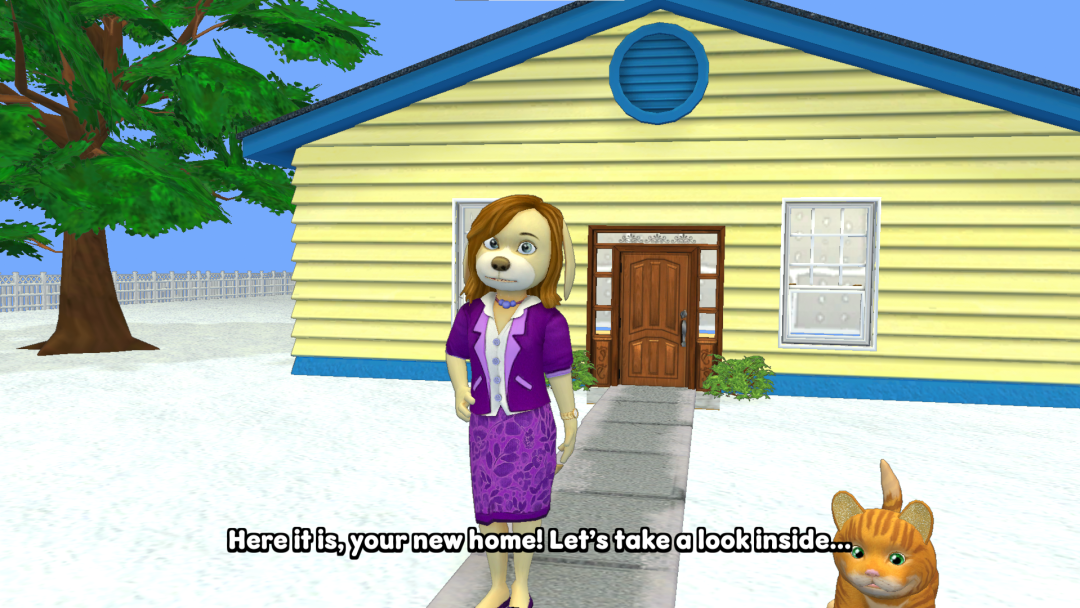 OH MY GOD. WHAT IS THAT. it's hideous. where's miss birdie? this shit looks like something from the wii. yknow, the console that came out in 2006. oh god look at that tree in the background. it literally looks like something from the N64 or a third party Wii game. (but to be fair it does look better than the trees from Pokemon Sw/Sh) and honestly, it's not even that the graphics are ugly, it's more the fact that the models have a certain uncannyness about them. i can give miss biscuit a pass, because the player models are the thing that's straight up f**king terrifying. it makes me feel bad though because they didnt do anything wrong, and i could never wish any pain amongst their little hearts. but c'mon. LOOK AT THIS. 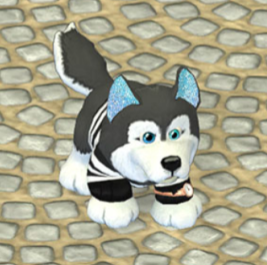 how can someone love this? it's genuinely horrifying. why... are its eyes like that? change the eyes and maybe it'd be fine, but oh my god. it's like they tried to keep the original anatomy of the animals, but add detail. which makes it super uncanny. yknow the original webkinz animals? yknow, the ones that were cute? 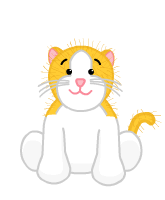 it wouldnt be hard to model a webkinz that looked cute. do you want detailed or do you want toony? you cant have both, or it'll be an abomination. you had one job Ganz, one job.

am i being too nit-picky with the graphics? of course graphics dont make a game, but when theyre this uncanny it seems like they put no love and care into it. i know modeling is hard, but they all share the same body. 3d modeling a toony animal head isn't hard. maybe their budget was too low to hire someone who could really capture the original webkinz style... or maybe they're just lazy.

there isn't anything more that i can say about the graphics. they're cursed. that's it. oh and there's a high/med/low graphics setting but it doesnt change anything. i swear i stared at them for a solid 8 minutes trying to see what difference it had...
lets focus on the gameplay though. but since this game only came out 2 months ago, there isnt much you can do. you can walk around, you can play games. but there's only like 9 games to chose from, and half of them are just ports of the ones from webkinz and the ones that arent are just half assed 3d remakes of existing games. god they didnt even chose the ones people liked, they just chose the ones the easiest to program. c'mon, smoothie moves? tile towers? home after dark? those are the most boring games in the entire arcade. oh and remember Wacky Zingos? i was happy to see that they remade it until i actually played it. somehow the physics are WORSE than the ones from the original. THE ORIGINAL WAS MADE IN 2005.
they only have 2 new games, which i already forgot the name of because they f**king suck. one's just a webkinz reskin of that one game where you stack the tiles and it gets faster and faster and you have to click at the right time or you lose. and the other is literally just Gliding Simulator 2020. like the jetpack game from club penguin but somehow worse and more tedeous than it is challenging. i played that game for like 10 minutes and won 5 kinzcash. which isn't a lot. food in this game is like 30+ kinzcash and you have to feed your animal like 5 times to feed its damn belly.
if you were to ask me what games they shouldve remade, i definitely wouldve chose cash cow 2. i recall that one being super popular on the original webkinz. oh and jumbleberry fields, that one was my favorite. it was literally just a dice game but you won prizes and the dumbass collector inside of me played that shit nonstop. and of course, Spree! Head to the Mall. it was a board game you got dice rolls on every day, and you'd collect money you could cash in for prizes once you reached the end. it was so fun i remember glitching the game just so i could get more rolls haha.
one thing that i find cool about the new arcade is the addition of a character (i think hes a statue?) that gives you challenges. you have to beat a certain score and he'll reward you with a prize. oh and they added tickets. when you play a game you of course earn kinzcash but you also earn a few tickets which you can cash in for prizes! it's really cool, though the prizes are a bit lame. i bought the dice table because everything else was ugly. oh and speaking of furniture, you can decorate your house with updated furniture, which is the one thing i like about this game. the models for the furniture are actually really cute, even if they're just 3d versions of furniture from the original webkinz. but to be honest, the models look like they were made in MS Paint 3d. but that kind of gives it that shiny, plastic, toy look to it. which is perfect for webkinz! they have enough furniture to furnish a decent house, which is nice. but the one thing they lack is clothes. there's only like 10 different options for clothes. in total. because 90$ of the clothes cost "gems" which are currency you buy with real money. which makes sense, this game doesnt have membership yet and they need money somehow. but at LEAST make it so non-members can have access to clothing. it wasnt like this in the original webkinz, we actually had variety. please dont let this be another animal jam. please please...

final thoughts: honestly this game sucks, but it's only been out for 2/3 months. they have so much to add to it, and they still have time to update those extremely uncanny models. so i really cant judge. the only bad thing about it is its lack of features, ugly models, and glitches. but of course that's what to expect of a game that came out a few months ago. i'm looking forward to the development of this game, it could revive webkinz. and if it doesnt, i'm going to be sad. oh and, one last thing. yknow how beanie babies rebranded into sparkles and unicorns and sequins and rainbow and glitter? please dont let this be the case with webkinz. ganz is the only company that hasnt done that yet, but they already added the large glittery eyes to the new stuffed animals... that's how TY started off, the big eyes. and then they added multicolored fur. then unicorn horns. and the god forsaken reversible sequins... oh man. only a matter of time until they gradually become less like cute pets and more like a glitter craft monstrosity. i dont have very much hope in this... and if it fails, we always have webkinz classic. i hope. (i really hope they dont shut it down ahaha...)